As More People Ride Bikes in the Metro area, bike injuries and deaths are on the rise. Learn what can be done to protect yourself and your family before or after a bike accident.

I love to ride my bike in northern Virginia, but traffic patterns and increased volume concern me, explains Jeffrey J. Downey, a personal injury lawyer handling bike accidents and claims in Virginia, the District of Columbia and Maryland.

Bicycling has been increasing in cities across the country, providing an alternative to automobile travel.  Bike share programs have been set up allowing for people to move across the city.  Truck, bus, automobile drivers, motorcyclists, pedestrians and the bicyclists all share the same the road.  In the past, the only bicycles you saw on city roads were bike messengers delivering packages to law firms, trade associations, and brokerage houses, and expertly dodging opening car doors and squeezing between moving vehicles.  But in the 21st Century, with the distraction of new technologies, the road has gotten crowded.  Sure, the benefits at first seem to be that cyclists receive great exercise, and being outdoors, but the potential for distraction is for all to see.  There should be an understanding between commuter cyclists, recreational cyclists, and motor vehicle drivers.

Bikers need to be aware of the increased safety hazards that are now being reflected in new statistics recently published, including statistics looking at injuries and accidents in the DC metro area.  In these jurisdictions bikers are judged by the same legal standards as drivers and any percentage of fault by a biker in causing an accident, can be a complete bar to any legal claim under contributory negligence principles, explains Downey.   In Maryland, for instance, it was not even clear if bikers enjoyed the same protections of pedestrians when riding the cross walk.  A recent news article in the Washington Post reflects what prompted the change.

Beginning Oct. 1, Maryland law will give anyone on nonmotorized wheels — including bicycles, children’s play vehicles, and even unicycles — the right of way in crosswalks. The new penalty for hitting someone on wheels will be the same as it is for striking a pedestrian: up to a $500 fine and two months in jail. The law will apply only where local ordinances allow bicycles and play vehicles on sidewalks.

This change in the law should protect bikers in the cross walk, but in other situations, like in D.C. and Virginia, they will likely be held to the rules of the road.  As such, bikers should not attempt to cross an intersection against the light or ride the wrong way on the street (against traffic), as such conduct could be construed as negligence barring any potential negligence claim.  It’s also important that when an accident does occur that a bicyclist call the police to issue a police report.  Make sure you get the name of any witnesses to the accident before they leave the scene.  Never assume that an investigating police officer will secure that information.

Some statistics of note from the Center of Disease Control and prevention which have researched into this number and type of cycling accidents in the US. 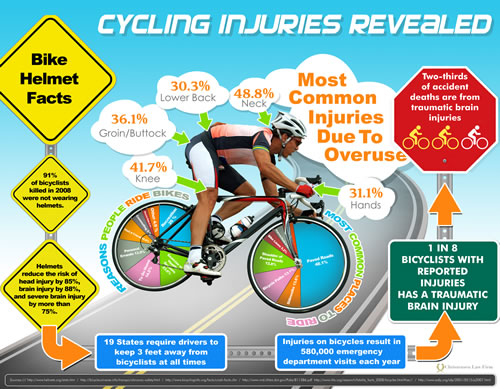 Of course, the best idea is avoid an accident in the first place, explains personal injury lawyer Downey.  Below are some helpful links to review in planning your next ride.  And don’t forget to wear your helmet.