Hospitals Are Not always in the Business of Patient Care – Some Prioritize Profit over patient care by limiting staffing levels; But some Doctors Are Speaking Out

A newly minted physician first learns the Hippocratic oath, promising in part to do no harm.  Apparently, that type of thinking doesn’t reach the board rooms of many hospitals, especially emergency departments. Even when the member of the board room is a doctor, explains Virginia malpractice attorney Jeffrey Downey

Inadequate staffing in hospitals and nursing homes puts patients at risk for adverse outcomes that are completely avoidable, including falls, pressure wounds, medication errors, improper or missed diagnoses, and even wrongful death.

Some healthcare providers are speaking out and getting fired for it.  A former army doctor and medical director of an emergency department in Kansas was fired because he spoke up on the issue, which he saw as the major reason patients were being endangered.  The hospital in Overland Park, Kansas, owned by HCA, became dangerous as the increase in beds with the lack of physicians led to more “code blues,” the medical term for when patients whose hearts had stopped beating or who were no longer breathing.

According to the NBC news report, in 2015 and 2016, frustrated by the inaction on the code blue policy, Dr, Brovont took his and his colleagues’ concerns to Dr. Patrick McHugh, his superior at EmCare, the health care staffing company for the hospital.  Federal law required Level II trauma centers like Overland Park to make a physician available 24/7 in the emergency department to examine incoming patients, Brovont told McHugh.

Since 2011 EmCare, a health care staffing company, has been owned by the private equity firm Clayton, Dubilier & Rice. The firm exited its investment in EmCare in March 2015 after the company issued stock to the public, but EmCare directors, affiliated with Clayton, Dubilier & Rice, remained on EmCare’s board into 2017. EmCare became Envision Healthcare and was bought by a different private equity company, KKR, in 2018.

Dr. Brovont has gone public to NBC News on the matter for the first time when he sued EmCare for “wrongful discharge in violation of public policy” in 2017. A jury awarded him $29 million, including $20 million in punitive damages, which was reduced to $26 million on appeal. That ruling was final. I’ve also linked to the court judgment if you want to delve into the case further.  (Link)

In the Kansas case, the hiring of an additional doctor might have solved the problem of doctor understaffing, but that didn’t happen. As the court records show, in an email to the physicians Dr. McHugh wrote “Profits are in everyone’s best interest.”

Emcare had allegedly admitted Medicare patients unnecessarily to the hospitals whose emergency departments it oversaw.  In Medicare practice, payment is at least 3 times higher for inpatient admissions than for care billed as observation in an emergency room. 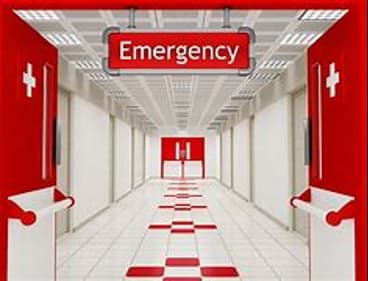 In Dr. Brovont’s case, the physician who owned EmCare subsidiaries wasn’t involved in the daily operation.

It is interesting how this questionable blend of corporate profits and medicine seem to work in opposing directions.  One owner of 300 emergency practices tied to Envision, which is Emcare’s parent company, or Emcare, is a former physician.  Dr Byrne was a former emergency medicine practitioner in Texas and  Dr. Brovont was not aware of the individual who was, on paper, running the Overland Park facility.

In a ruling by the court in 2017, for Dr. Brovont the court explained that the exact number of EmCare subsidiaries he (Dr. Byrne) owns changes every month, and he (Dr. Byrne) does not keep track of them or take any management role in any of them. “The number does not matter to him because all the profits of the subsidiaries flow to EmCare.” Records indicate that Byrne is listed as an owner of several physician practices in 10 states, none of which, are in Maryland, Virginia, or Washington DC.

There is a similar lawsuit action going on in California, but this time, it is from AAEM, a non-profit professional medical association that provides administrative services to physician groups.  The defendant in the case is Envision Health.

Emergency room doctors work the front line of care in a hospital, whether in an emergency room or an ICU.   When a patient goes in, he does not want to be seen as just a number in a ledger for profit.  Sadly, these days many companies managing hospitals and nursing homes prioritize profits over patient care

If you or a loved one has been injured as a result of negligence on the part of a health care provider, contact our law office for a free consultation. We handle cases in Virginia, Maryland, and Washington DC. No attorney’s fees are charged unless there is a recovery.